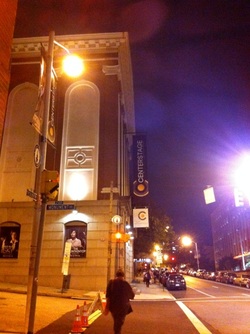 Modern standards of good behavior implore that we don't discuss religion, politics, or money in polite company.  Leave it to a quintessentially Baltimore event like the October 2 Stoop Storytelling show to casually discard convention when Laura Wexler, Co-Producer of the series asked the crowd of attendees to raise their hands if they believe in God.  The theme of the show was Believe it or not:  Stories about finding and losing faith.  Regardless, the look of mortified incredulity Wexler's partner in crime, Jessica Henkin, gave her was priceless.

This was the Stoop's first show of their seventh season.  That's seven seasons of openers by local musicians and seven seasons of seven-minute stories by regular Baltimoreans.  In fact, a large portion of the audience had previously been on stage.  Stoop takes proposals for stories based on a theme for every show and then chooses and works with storytellers, many who have never participated in such an endeavor, to tell an engaging tale in front of a large audience.  With the idea that everyone has an interesting story, it looks as though they have had quite a successful enterprise since this show sold out.
The October 2 show was a convenient two blocks from the Mount Vernon stop of the JHMI-Homewood shuttle at Center Stage, a fairly common location for Stoop’s events.  The venue has comfortable, open auditorium seating and hosts a diverse array of theatrical events.  Their current large production running until November 25 is Poe, a “tale of the morbid life and mysterious final days of Baltimore's treasured emblem of oddness,E.A. Poe.” 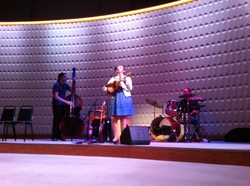 Local singer-songwriter Letitia Vansant played the opener.  Vansant’s music has a cheery acoustic aesthetic with clever lyrics inspired by a lifetime in Charm City, Quakerism, and domestic and international travel.  She has the wonderful, genuine and energetic stage presence of a performer that loves her art and really wants to connect with her audience.  Vansant’s recently released country-folk album, Breakfast Truce, a term coined in WWI that describes the temporary ceasefire across enemy lines so that each side could enjoy breakfast, is an excellent listen that I highly recommend!

As for the meat of the event, I initially thought the stage seemed large for a single person telling a story, but that feeling quickly dissipated when the lights dimmed and the spotlit storytellers filled the stage with narrative.  This show, dealing with the topic of religious faith, really ran the gamut of emotional pathos.  Stories ranged from a light-hearted recount of finding faith as a JewBu (the woman actually used this term meaning Jewish Buddhist, I kid you not!) to a story about losing faith from a civil rights activist to one of ambivalence towards faith of an HIV positive gay man whose mother had him undergo an exorcism.   By far, the most wrenching story was about the childhood of a man who grew up in a family firmly entrenched in Scientology and its lasting effects on his life and relationships.   All seven storytellers, as well as two audience-member participants, told excellent deeply personal stories. 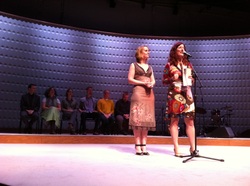 As graduate students at the Medical Campus, it is far too easy to become reclusive lab rats.  That's what we signed up for, right?  But it is important to remember that when our experiments are failing miserably and our advisors are pressure cooking us to produce data lest we NEVER graduate, that there’s a world outside the Hopkins bubble.  Baltimore City and its people are marvelously interesting, and the Stoop Storytelling Series is one of the many resources we have to explore experiences outside our own.

If you’d like to hear or tell stories, Stoop has events once a month until May 2013 (except January).  Tickets typically cost $20 with a season pass costing $68.  However, their November 28 show, titled Second Stoop, will feature all informal, audience-member told stories at the Windup Space in Station North, and is a mere $7 admission.  Go practice your extemporaneous presentation skills, and tell a story.  The Stoop’s annual Hopkins: A World Inside a City event is scheduled for April 12, 2013.  If getting out of lab seems impossible, sample stories from previous shows at their website (below).

If you’d like to work on storytelling in a less formal setting (and meet some fantastically interesting people!) Baltimore also has a parallel storytelling series called Potluck Storytelling that pays more emphasis to community-building and smaller, intimate settings.