When people go out for food, it is very rare to hear someone say that they are craving Filipino food.  The history of the Philippines though has evolved the cuisine to be a hybrid of three cultures, Philippines, Spain and the US, making it a most unique experience.  Sometimes though when a foreign culture brings their customs to America though, they get warped and dulled to fit the American taste.  This little place I found though on the Eastern edge of town has resisted the Americanization and teleported me straight to the land of 7,000 islands.

As soon as I walked into the little café, I realized that this was the authentic deal.  Looking around, I was the only fair skinned person inside and no one was taller than my shoulder.  I had hit Baltimore’s Little Philippines.  The restaurant is owned and operated by a family from Bacolod City of the Visayas region of the Philippines.

I was first greeted in fluent English and asked what I would like.  Having lived in the rural areas of the Philippines for two years, I replied back in their native Filipino tongue.  They lead me to the serving area where they had several types of ulam (the toppings they serve on rice) already cooked next to the biggest rice cooker I have ever seen.  The mother of the family conversed with me about each dish that was available and then asked if there was anything I would like cooked beyond what they had already prepared.  The dished that were available at the time were limited, but contained my favorites.  The mother then told me that I had come too late in the day, because from 11 till 3 is when they have the buffet going and there is about triple the options.  What were available were Tinolang Manok (chicken soup with ginger), Adobong Baboy (pork cooked in a soy sauce and other spices), Dinuguan (you can Google this if you want to know what it is made of), Ginisang Monggo (mung bean soup), Pancit Bihon (rice noodle dish) and Lumpia (a superior cousin of the egg roll). 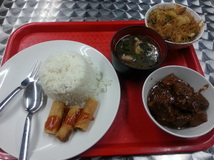 I ordered a combo plate, which consists of a large cup of rice, three lumpia and three large servings of ulam (left photo).   I chose to get the tinolang manok, adobong baboy and pancit bihon.

The tinolang manok was excellent.  The weather outside was bitter cold, so the hot chicken broth with the zing of ginger mixed with rice was perfect.  As is done in traditional Pinoy cooking, the chicken bones and skin were still attached to the meat.  Both of which add flavor, but a little different for the American eye.

The adobong baboy was slow cooked so the meat fell apart.  The sauce was a dark brown and had just the right amount of vinegar and sugar added along with other spices to give it a slightly spicy taste.  The only word of caution here is that as is custom, the layer of fat and skin was not removed from pork.  So just cut that off with your spoon and push to the side for those not interested. 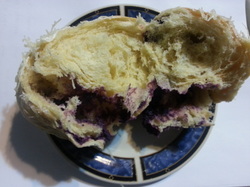 The only thing missing from this wonderful experience was a bowl of Halo Halo.  This is a dish that they only serve during the warmer months of the year, but would have completed the night.  It is typically made of shaved ice, sweetened condensed milk and various candied fruit toppings.  Instead, I browsed their bakery goods in the back and found a flavor not native to America, Ube.  Ube is a purple sweet potato that is used in various desserts.  I selected an Ube Ensaymada (Ube flavored sweet roll) that was a little on the dry side, but still delicious nonetheless.

The café was a purely Pinoy experience.  They not only served food, but utilized the walls and back portion of the building as a store to sell Filipino made snacks and groceries, very much like the tindahans (stores run out of the side of a house) that dot every block in the Philippines.  For those that are not fluent in Tagalog, don’t worry though.  I saw a white gentleman walk into the café halfway through my meal and he was greeted and treated with the same kindness that I was, reminiscent of the family’s grassroots.

For those on a budget but want to experience different cultures, this is a great place to start.  The food was exactly how it is found in the Philippines and the customer service was exactly what the Philippines is known for, strangers are family.
Powered by