A tribute to Reed Hall
By Gloria Abena Opoku-Boateng 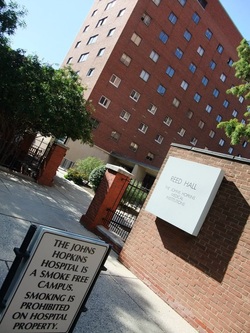 One morning, I went down to Thames Street to meet my preceptor for my prospective capstone project at The Armstrong Institute for Patient Safety. As I sat in the lobby waiting for my preceptor, I couldn’t help but pick up the Fall 2011 edition of The Johns Hopkins Magazine. On the front page was a photo of a little boy whose bright and radiant smile seemed to welcome the new Sheik Zayed Tower and Charlotte R. Bloomberg Children’s Center. I read about the things that had changed over time around Hopkins. However as I flipped through the pages, instead of enjoying the colorful photos of the new building which was soon to be opened, I found myself thinking of old Hopkins buildings that would soon be shut down; for instance,- Reed Hall.

The probability that any medical, nursing or public health alumnus of Hopkins lived in Reed Hall is as high as sixty-percent. Most of these people have numerous stories and experiences with on-campus housing. However one theme stands out; for them, Reed Hall was a home away from home. After so many years of service to both students and visitors of Johns Hopkins East Baltimore campus, the time has come for Reed Hall, which comfortably sits in the heart of the Medical Campus, to close its doors to its residents. After a distinguished life full of enviable service and achievement, it is difficult to see Reed Hall shut its doors. The 929 resident building must suffice, but there is nothing that will fill the place Reed Hall holds in the hearts and minds of past residents.

After the meeting with my preceptor, I paid close attention to Reed Hall as I walked back to my room. As I looked around, I silently wished that if Reed Hall could have feelings, that I could share in them. I wondered how it embraced the fact that new buildings like the Sheikh Zayed Tower and The Charlotte R Bloomberg Children’s Center would be opening in a few days while it had to shut its own doors to residents indefinitely. I wondered if it felt neglected while every Hopkins circulation solely focused on the new buildings. In all my marveling, I still could not fully empathize with Reed Hall. If only Reed could speak out and say to its past residents: “Do not fret, -my time has come, I have fought the good fight, I have finished my service, my memory still lives on in the minds and hearts of past and current students.” I nodded to myself knowing that it was true.

I bowed my head and silently prayed that Reed Hall would understand that it was built for a purpose, and its purpose had been fulfilled. This simple prayer brought me peace, so much so that I could almost feel ‘Reed’-smile back at me. “Besides”, it said as it spoke again, I am rather old and musty, and most of my floors have been declared unsafe by the fire safety officers “I firmly nodded in solemn agreement with the building.

Looking around one last time, I started to laugh at the whole encounter. As I continued walking, I caught sight of one of the picnic chairs in the inner court of Reed that was covered in Spring petals. As I looked a little closer, there was a message carved across the wood of the chair that read, “You can shut my doors but you cannot kill my legend…” Smirking, yet thoughtful, I picked up my bag and went down the stairs to the bottom floor of the Hall. “It is at least somewhat true,” the building said to me. “Parts of my space will be used for offices and the memory of Reed Hall will live on…I won’t be completely gone.”

I smiled one last time as I reached for the elevator doors. “Goodbye, Reed Hall,” I said. “You have served us well.”’ As I stepped into the elevator, I thought I heard a slight chuckle. “Well, I tried as best as I could,” the Hall replied,-“Goodbye.”

Fellow students, residents, and staff, as you pass by the Broadway, please join me congratulating Reed Hall and its entire housing staff for a job well done.