Off to the Corner BYOB by Gabby Sell 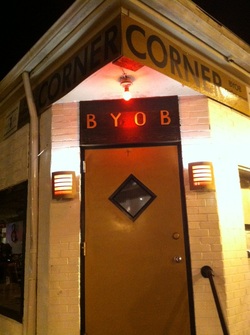 In the heart of Baltimore lies a small restaurant called Corner BYOB, whose Monday night special is a date night dream.

Upon entering this small restaurant, you are greeted by the delightful hostess and owner, who seats you quickly with the night menu. The intimate feeling of the small size of the restaurant is only enhanced by the addition of candlelight and sparkling, pristine wine glasses. Almost immediately one of the knowledgeable servers comes to explain the menu and open any drinks you may have brought. (As the name implies, they do not serve alcohol, which is swiftly remedied by the liquor store across the street.) The servers not only know the meals, but are able to make suggestions based on the wine you have brought for the occasion.

On Monday nights, this restaurant holds a special: a three course meal for $25.00 a person. While this may be a 'tad pricey' for a normal night out, the quality of the food and service makes this a spending splurge that won’t be regretted.

This particular Monday night held four appetizer options, vegan friendly by the chef’s choice. The romanesco soup was savory, smooth, with a hint of heat from the cayenne, a wonderful thing to fill the belly on a cold night. The table adjacent to ours was unsure of what romanesco was, so the server not only explained that it was a broccoli-cauliflower, but brought out a fresh head of it to explain the dish.

Each course was brought out and removed quickly, meaning that entrees soon followed the delicious appetizer. One entrée was a leg of lamb dish, completed with roasted rosemary potatoes and asparagus. A surprise touch was the inclusion of the more exotic purple potatoes. The meat and sauce were well-seasoned, while the vegetables were perfectly cooked. The elegance of the restaurant was further. Another entrée was the pheasant confit with squash puree, gravy, and cranberries. The pheasant was tender and paired perfectly with what could be described as Thanksgiving-like sides. Throughout the meal, servers were courteous, consistently checking your satisfaction with the meal and pouring more wine and water.
Finally, the dessert arrived. One dessert was a napoleon, smothered in a rich cream that was not overly sweet with a heavenly texture. The strawberries added a light, fresh touch to this sweet end to the meal. The dulce de leche was a dessert for the less sweet-inclined, with its tempering puff pastry and salty finish to the smooth caramel sauce.

Since this restaurant is not as large as traditional chain restaurants, reservations are highly recommended. In addition, the Monday menu changes frequently, meaning there will always be something new and exciting to try, but probably not any tried and true favorites.  Finally, one last thing to keep in mind is that this is a cash only establishment, so remember to pack more than your debit card.

Overall, the delectable food, intimate ambiance, and incredible service make this one restaurant you can’t afford to miss, despite it’s price and necessity to plan ahead.