Baltimore music for the newcomer
by Celine Cammarata

When they heard I was moving to Baltimore for graduate school, my more artistic friends were quick to tout the city’s exciting and eclectic musical world.  Once I was here, however, it became obvious that between classes, lab work, and the general graduate school pandemonium, finding time to explore this world was not entirely straightforward, especially when I had no idea where to start.  To help shed some light on the Baltimore music scene, and how newcomers like myself can find their way in it, I turned to Charm City native Jack Moore; Moore is the owner of ¡El Suprimo! Records in Fells Point, now nearing it’s 10 year anniversary and a member of the band the Mopar Mountain Daredevils. 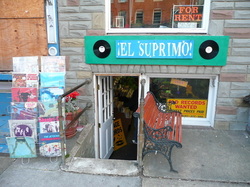 I gave up my job as the manager of an art gallery in the late 80's to make a go at the music biz. Playing in bands since the mid 80's and collecting records since the 70's, music was always my real focus in life, so I jumped in with both feet.  One day the owner of the Record and Tape Exchange stores came into the gallery and knowing of my interest in music, asked me to manage his store in Fairfax, Va. That would have been to much of a commute so I passed up his offer. However, I did agree to work in his College Park location. While at the RTX, I was asked to do a radio show for WMUC, the University of Maryland station. With that gig and working at the record shop, I landed a permanent spot on the 9:30 Club [a music venue in Washington, D.C.] guest list from the late 80's into the early 90's. From there I continued to play in bands, work in record stores and generally immerse myself in the music scene.  Fast forward to 2002 and I opened El Suprimo Records. My record label started soon after.

I was born in Baltimore but lived outside the city until 1993 when I moved into the Sowebo district, which was the music and art center of Baltimore. At the time, I think everyone on my block played in a band or was involved in the arts. Baltimore has been my home ever since.

•         What are some of your favorite venues around Baltimore to see live music?

For decades I would be out every night, all night. At this point in time, I don't get out as much. If I'm out at a club or party, it's because I'm the dj or my band has a gig.  That said, I do keep my eye out for when the interesting bands come through town. Also, my friends will give me the heads up for the "you gotta see these guys" type bands that are off my radar.  When that happens, the bands will usually be playing the Golden West Cafe. I have always liked smaller venues where the band and audience can become one. The Metro Gallery is another good small spot. The 1919 is the smallest spot. The Ottobar is also cool but larger. These are the bread and butter spots for me to see live music.  House parties, outdoor shows and warehouse venues are the best gigs. The Floristree Space is probably the best of the warehouse clubs.

•         In particular, can you name one or two spots that you would recommend for newcomers to Baltimore?

The Floristree Space gets my vote for unique music venue. It has a certain gene se qua that captures the true essence of Baltimore. The creative do it your self vibe that has shaped Baltimore's music scene is there on display.  The Meyerhoff Symphony Hall should also be of interest.

•         Are there any other places in Baltimore that you think music lovers should not miss?

A statue of Billie Holiday is on Pennsylvania Avenue. Also a bust of Frank Zappa is on Eastern Ave.  There are a number of other record stores in the city. I would recommend checking out The True Vine.  If you are a musician and would like to have your tunes professionally recorded, check out Lord Baltimore Recording. Also if you are in need of instrument repair, check out Big Crunch.

Currently I like The Pilgrim. Arboretum is also cool. Back in the day I was digging Reptile House, Vincent Black Shadow, Women of Destruction and Grey March.

•         Do you feel that Baltimore bands have any particular flavor or sound to their music?  If so, how would you describe this, and how - if at all - do you think it may have changed over time?

Baltimore has always had an active music scene. Most of the bands try to be very original. To be true to themselves and not pander to the audience to much.   A few years back some bands in their search for originality lost all sight of melody and rhythm. It seems Baltimore became known for it's blending of youthful art sensibilities and noise. Not my cup of tea. But being a very active music scene, Baltimore has much to offer. I look forward to the next phase.

•         What about the music scene in Baltimore more generally - how would you describe it?

Well, you can see a live band every night and you can take your pick of the style.

It's got a nice small town feel, unlike D.C., Philly or NYC, let alone London or Berlin.

Most of the bands just love playing music for music's sake and not turning music into a commodity.